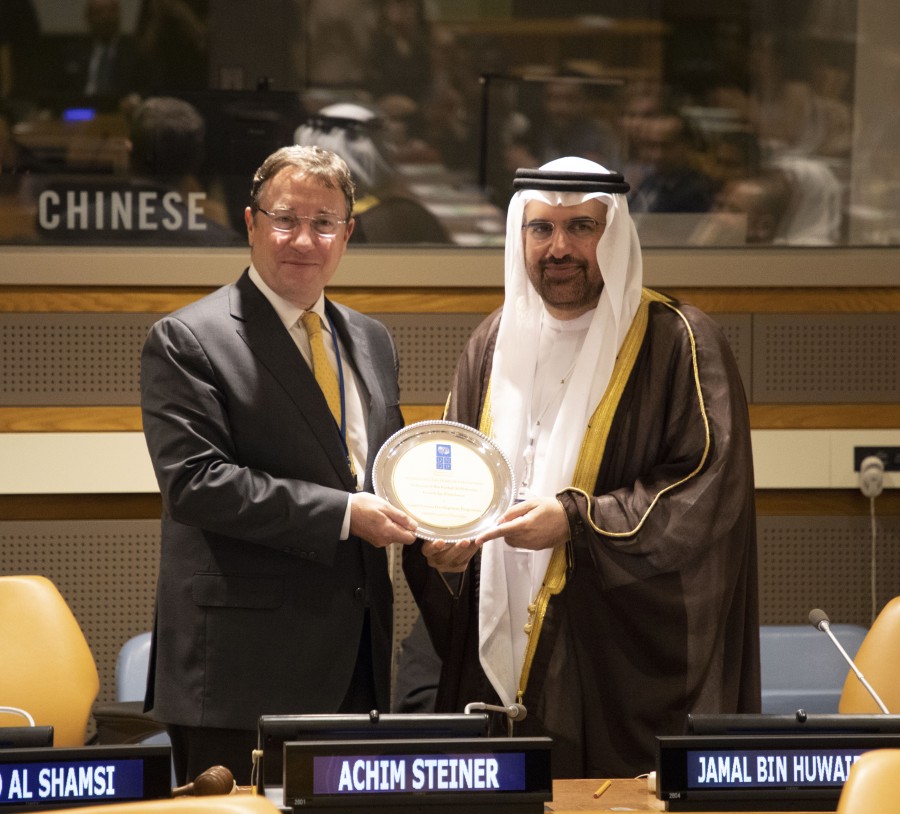 The United Nations Development Program (UNDP) has honoured the Mohammed bin Rashid Al Maktoum Knowledge Foundation (MBRF) as a “Knowledge Partner” on the sidelines of the General Assembly’s meeting in New York City.

The UNDP sought to honour the Foundation to mark 10 years of close partnership, which resulted in several leading projects in the Arab region and the world. The ceremony was attended by MBRF’s CEO His Excellency Jamal bin Huwaireb, on behalf of His Highness Sheikh Ahmed bin Mohammed bin Rashid Al Maktoum, the Foundation’s Chairman, in addition to H.E. Achim Steiner, UNDP Administrator; H.E. Saud Al Shamsi, Deputy Permanent Representative of the UAE to the UN; and H.E. Mourad Wahba, UNDP’s Deputy Assistant Administrator and Deputy Regional Director for the Regional Bureau for Arab States.

Honouring the Mohammed bin Rashid Al Maktoum Knowledge Foundation marks the first time any Arab organisation has been named “Knowledge Partner” and is the culmination of the many international initiatives launched by the Foundation, most notable of which was the world’s first Global Knowledge Index, whose results were announced at the Knowledge Summit 2017, and covered 131 countries around the world.

Speaking at the ceremony, H.E. bin Huwaireb underlined the strong partnership that has brought the Foundation together with the United Nations Development Program for a full decade, asserting that the collaboration was “guided by the vision of the UAE’s wise leadership, who has repeatedly proven its commitment to strengthening our partnerships with entities at both the local and international levels, in an effort to build knowledge societies founded on sustainability and investment in human capital.”

The MBRF CEO conveyed H.H. Sheikh Ahmed bin Mohammed bin Rashid Al Maktoum’s gratitude for the United Nations for honouring the Foundation as a “Knowledge Partner” to the UNDP, noting that this constitutes “a significant addition to our record of achievements, which have had a notable impact on efforts to spread knowledge and develop human capital.”

H.E. bin Huwaireb’s speech highlighted the major milestones achieved during the decade-long partnership, “not least of which,” he added, “was launching three Knowledge Reports since 2009 to create a knowledge-centred movement in the Arab world and delve deep into the realities of knowledge in the Arab world and the role of new generations in the production, dissemination and localisation of knowledge.”

“The year 2015 witnessed a new and significant development in our relationship with the UNDP,” H.E. continued. “That was the year we launched the Arab Knowledge Index, which seeks to track the state of knowledge in the Arab world on a yearly basis, taking into account the specificities of the region. The flagship project was accompanied by the launch of the Knowledge4All initiative – an electronic platform serving as a reference for those involved in the knowledge sector.”

“The following year, in 2016, we sought to look into all of the knowledge initiatives currently underway in the Arab region and evaluate their impact on their respective communities. To that end, we launched the Arab Reading Index in an effort to measure the popularity of reading in our region and propose solutions for the challenges that face it. The Index succeeded in systematically debunking many misconceptions about reading in the Arab world,” he added.

“The ambition of our partnership expanded far beyond the borders of the region, with its positive results echoing all around the world. This led us in 2017 to launch the Global Knowledge Index, reiterating the strategic role of knowledge and the importance of creating tools to measure and manage it on a global scale,” H.E. bin Huwaireb concluded.

For his part, H.E. Achim Steiner said that investing in knowledge should be a priority for any country trying to achieve the ambitious Vision 2030, noting that the partnership between the Mohammed bin Rashid Al Maktoum Knowledge Foundation and the United Nations Development Program is rooted in a shared vision centred around knowledge as a means for sustainable development.

Meanwhile, Saud Al Shamsi noted that knowledge is the main engine for employment and economic growth, whereby entire categories of companies that were barely active on an international level are now dominating the headlines. “The Global Knowledge Index offers a roadmap for reforms and investment in many sectors – from school enrolment to labour,” he added, concluding with an assertion that the partnership between MBRF and the UNDP sets an example for the ideal approach to handle the contemporary needs of nations.

The honouring ceremony included a meeting between H.E. bin Huwaireb and Achim Steiner to explore how to further strengthen the partnership between the two entities, as well as another meeting with H.E. Mourad Wahba to explore the scope and prospects of the partnership for the upcoming ten years. The event concluded with H.E. bin Huwaireb receiving the award, followed by a session to announce the results of the Global Knowledge Index and the importance of knowledge in sustainable development.