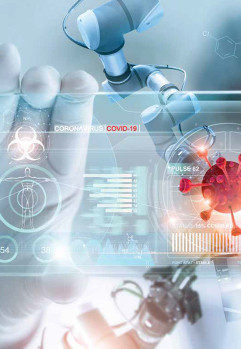 Emirati Innovations in the Face of Covid-19

The coronavirus pandemic could be having devastating social and economic effects on many countries around the world given the disruptions caused by lockdowns that were implemented by governments as a measure to reverse the spread of the disease.

The disruptions notwithstanding, Covid- 19 has prompted creativity among innovators who seek to find a solution that can forestall the spread of the pandemic. Several Emirati creative innovators are part of this struggle. We look at some who have made outstanding contributions to the fight against Covid-19.

As the pandemic continued to spread out of China’s Wuhan city, the World Health Organization (WHO) emphasized good hygiene as governments encouraged their citizens to disinfect and wash hands all the time.

In response to the national sterilization program, Ahmed Al Mazroui, the founder of the Al Mazroui Innovation Centre in Abu Dhabi, created a robot that can sterilize and spray all hard-to-reach and rugged locations.

The robot, according to an April 5, 2020 report by Gulf Today, is equipped with cameras and sensors for remote control, can work for up to 10 hours continuously without human intervention. It can be controlled remotely within a radius of 3 kilometers, and at a speed of 10km/h, it can sterilize an area of 100 kilometers.

“The idea of manufacturing the robot was inspired by the work of the national sterilization program, and it will contribute to providing solutions for the sterilization of open spaces, which reduces human intervention,” Mazroui said.

“It was manufactured in Al Dhafra, Abu Dhabi. It weighs approximately 30kg. It carries approximately a 50kg workload and works for 3 hours. The work duration can be increased with more batteries,” Alsuwaidi said.

Away from robotics to the United Kingdom (UK) where Fatima Al-Mulla, a PhD student in Biochemical Engineering at University College London (UCL) who has spent more than 113 hours volunteering as a nursing assistant at a hospital in London. Driven by the spirit of volunteerism in response to crises, Al-Mulla felt that she had a vital role to play when Covid-19 broke-out in the UK.

“I thought that I should have a vital role play in ending this global crisis. I said I should represent my country with humanitarian work and voluntary services since our wise leadership is our first inspiration and its stances is a school from which we learn how to help and give,” Al-Mulla told Al Bayan newspaper.

This disease does not discriminate,
knows no boundaries or cares
about humanity. We cannot
fight it with rhetoric or resolve.
We must act.

She was chosen from among hundreds of other volunteers, based on her experiences and qualifications. Her first assignment was offering psycho-social support to people quarantined at home or those in isolation units.

This meant that she had to understand their needs before the arrival of healthcare givers.

To support healthcare works involved in the fight against Covid-19, a group of 20 Emirati researchers, scientists and engineers last month embarked on a project which may lead to the production of new and more vital medical equipment to ease the pressure exerted by the pandemic.

The scientists are working under the auspices of Citizen Science, an Abu Dhabi-based research organization, supported by the Technology Innovation Institute (TII). The group has already successfully assembled their first ventilator prototype, which is now undergoing internal tests before being sent for external testing and verification, the Emirates News Agency reported on April 19, 2020.

“This disease does not discriminate, knows no boundaries or cares about humanity. We cannot fight it with rhetoric or resolve. We must act. Simply, innovating new ways of producing and supplying our front liners and patients with more efficient medical equipment could be the difference between life and death for many thousands of people,” Dr. Al Teneiji said.

At Khalifa University of Science and Technology, Abu Dhabi, a group of researchers developed a mathematical model that can be used to measure the impact of Covid-19 on the population.

This open-source model, according to the university, enables non-experts and policymakers to understand what to expect as the disease spreads.

Their motivation was in knowing how crucial it is to make proper predictions for the contagion and the number of fatalities to enable proper healthcare planning and evaluate the impact it may have on society.

Fatima Al-Mulla’s first
assignment was offering
psycho-social support to
people quarantined at home or
those in isolation units in UK.

They evaluated the use of personal protective equipment such as face masks and the increase in the availability of critical care beds.

To test their model, they used individuals transitioning between infection stages and segregated by age group. Each individual in the study population belonged to one of the possible stages of infection – healthy, asymptomatic, symptomatic, hospitalized or recovered, among others.

he model, a ccording to the researchers, best describes a big city with ample use of public transportation. They applied a number of static and dynamic interventions to the model’s parameters to simulate what would happen to the number of people in each disease stage. Preliminary results have indicated that universal social isolation measures may be effective in reducing total fatalities, but only if they are strict and the average number of daily social interactions is reduced to very low numbers.

“Interestingly, selective isolation of only the age groups most vulnerable to the disease appears almost as effective in reducing total fatalities, but at a much lower economic impact. Most importantly, our results indicate that ending isolation measures too soon appears to render the previous isolation measures useless as the fatality rate eventually reaches nearly the same result as when nothing is done,” Dr. Rodríguez said.

Strategies for data sharing, generating and disseminating timely information are some of the steps the researchers have recommended for academia, policymakers, and the public, Emirates News Agency reported.