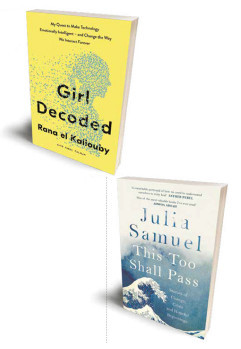 Throughout the course of history, the power of need, the differences of cultures and the struggle for one’s absolute beliefs, have induced the necessity to take risks and follow one’s dream in order to achieve success. This brings us to the Egyptian-American phenomenal author, Rana el Kaliouby, who has dedicated her life and locked her visions on not just proving that nothing is impossible if you believe but in fact, found a way to humanize technology and create a breeding ground medium where humankind and technology can co-exist and connect with each other.

Rana el Kaliouby has established herself by example through hard work and uncountable achievements and iconized herself as a rarity in both the tech-world and her native Middle East. Growing up in Egypt and Kuwait, under strict observance of traditional values Rana was determined to pursue her dream. She excelled as a self-grown scientist, ready to prove that she was in charge of the field. She has demonstrated the thought of following one’s dream, giving all children of societies across the world a massage to think outside the box and never be afraid to follow one’s dreams.

Rana’s ultimate target was to humanize technology before it dehumanizes us. In spite of the hardships she faced, such as being a divorced mother of two, she did not hesitate or succumb; in fact, she was very calculative and thoughtful enough to advance onto the philanthropic level regarding the unavoidable high risk of being controlled by technology.

Observing how all communications ranging from facial expressions to body language are being diminished and engulfed by people’s interactions through the use of smartphones, she felt the urge to save humankind through co-founding Affectiva, the pioneer in the new field of emotion artificial intelligence, allowing technology to understand humans the way we understand one another.

“Girl Decoded” chronicles El Kaliouby’s journey from being a “nice Egyptian girl” to becoming a daring woman, carving her own path as she revolutionizes technology. However, the process of learning to express and act on her own emotions has proved to be the biggest challenge of all.

She has paved the path, led by example in her field in order to encourage future generations to further develop her line of work, carry her legacy and establish a healthy humankind-technology connection that would contribute to the continued existence of humankind.

THIS TOO SHALL PASS: STORIES OF CHANGE, CRISIS AND HOPEFUL BEGINNINGS

Everybody finds change difficult; however, on the long term, it is the exceptional driving force that pushes us to the brink and forces us to become better and stronger.

The quotation, “What doesn’t kill you, makes you stronger”, attributed to German philosopher Friedrich Nietzsche, is a famous line that illustrates how change makes people adapt to new conditions and always favors to push them forward, but never backward. In “This Too Shall Pass” Julia Samuel, a psychotherapist and a grief counsellor, zooms on the cycle of change, thus giving us a deep insight into various crises in life and just as how there is always a rainbow after the rain, humankind needs to find ways to settle with the discomfort of change in order to realize the “potential growth” and reach satisfaction in the subsequent phase. Samuel sheds light upon major issues relating to family, love, work, health and identity, which indirectly inf luence humans’ navigation through life.

According to Samuel, as all people tend to deal with change in different capacities and reactions, the key to resilience and hope is the quality of relationships and bonds formed among families, friends and neighbors. She draws on countless patients’ case studies as well as insights of 30 years of clinical practice in order to build a credible image and map the influence of change in people’s lives, and how to cope up during crisis in order to blossom into a new era filled with joy and happiness. Samuel emphasizes on how there are many figurative relationships that develop within one relationship as time passes, such as how a mother learns to gradually loosen the grip on her adult daughter and also how men transition themselves into fatherhood.

Sometimes change arrives abruptly, other times it’s a part of natural ebb and a flow of life. Therefore, it is best to not bypass the experience but, rather, deal with it very cautiously and chronologically, as failing to acknowledge the unfortunate event and not going through the aftermath period, which is referred to as “fertile void”, might lead to fatal consequences and inhibit one from growth and carrying on in life.

The main message which Samuel highlights is that just as “harsh times” pass, good times pass too; therefore, society needs to adapt to intellectual growth and transformation through the experiences and experiences of people around in order to enlighten one’s journey in times of change and become living examples and role models for future generations.