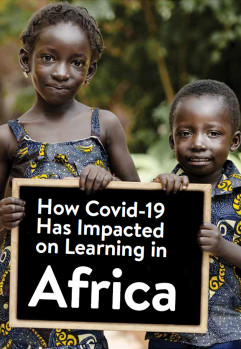 How Covid-19 Has Impacted on Learning in Africa

The outbreak of the coronavirus disease (Covid-19) late last year caused major disruptions in every aspect of life around the world, with education being one of the hardest-hit sectors. Most schools and other educational institutions have been closed due to the pandemic, disrupting the learning of billions of pupils and students globally.

The United Nations Educational, Scientific and Cultural Organization (UNESCO) estimates that about 1.5 billion learners worldwide are unable to go to school or university owing to measures instituted by governments to curb the spread of Covid-19.

Africa hadn’t felt the impact of the pandemic until mid March when the continent registered a spike in Covid-19 infections, and temporary closure of learning institutions was announced.

As the number of infections continued to go up, it became evident that school would not open so soon, calling for alternative measures to enable the continuity of learning.

Some schools and governments adopted e-learning; sending learning materials to their students through the social messaging application WhatsApp or by email. A few schools conducted online classes using Zoom, a video communications application.

But in a continent dogged by connectivity and accessibility challenges, e-learning is unfavorable for the largest portion of Africa’s population.

According to the United Nations Economic Commission for Africa (UNECA), only about 17.8 percent of African households have access to the internet.

To facilitate continuity of learning, UNECA suggested, Africa urgently needs affordable broadband internet connectivity for schoolchildren who were forced out of school by the Covid-19 pandemic.

To bridge the gap, most countries activated the use of different platforms such as public, private and community radio and television channels to deliver lessons to schoolchildren at home.

This, however, came with its challenges. Some learners and parents are finding the television classes ‘too fast’ to be assimilated, as the Association for the Development of Education in Africa (ADEA) noted in a report published in April, 2020.

“These learners are sometimes forced to record the broadcasted lessons on their mobile phones in order to listen or watch again later for a better understanding. The learners also find it difficult to pose questions to the lesson presenters (educators) and have to seek answers from their parents, some of whom are unable to assist,” ADEA reported.

In Kenya, education programs that are aired through the national broadcaster specifically target learners in their final primary school year (class eight) and form four (high school) students. The Ministry of Education also initiated a number of methods for children to learn online and especially through Edu TV channel or Elimu TV channel. Besides radio and TV, the Kenya Institute of Curriculum Development (KICD) also uses a platform called Kenya Education Cloud that has diverse digital content based on a variety of learning areas presented through interactive pdf, e-pubs, audios and visuals.

These efforts have been complemented by other privately owned local radio and TV stations but still, many students and pupils have been locked out of learning especially in rural Kenya where gadgets like a smartphone, TV or radio set is considered a luxury.

“Universities are closed but the private ones continued teaching online. I am taking a course in a private university and our classes went on. We only suffered hindrances when we could not go out to do projects because of movement restrictions and the curfew,” said Maureen Kakah, an MA (Digital Journalism) student at the Aga Khan University in Nairobi, Kenya.

In Côte d’Ivoire, according to Global Partnership for Education, the Ministry of Education, Technical and Professional Training through the initiative named École fermée, mais cahiers ouverts (closed school but open notebooks) in partnership with Eneza Education, delivers free elementary school lessons through mobile phones. Online classes for preschool, elementary, primary and high school students are also available on platforms such as www.ecole-ci.online (my home school) www.ecoleweb.mysonec. com and on the EducTV Facebook page.

In Senegal, the Ministry of Education provided the online resource platform; the main tool to make teaching and learning resources available online. In its first phase, the platform will collect and classify digital resources. In its second phase, it will be opened to teachers, learners and parents. National TVs and radio stations are involved in this initiative as well.

Uganda had planned to re-open the schools on April 27 but the East African country’s president, Yoweri Museveni, extended the lockdown. The Ministry of Education and Sports announced a framework that had been designed to enable continuity of learning.

Under the framework, primary and secondary schools are taught on radio and TV while those in tertiary institutions and universities were required to do own reading and research. But nearly 90 percent of Uganda’s estimated 15 million learners do not have household computers or mobile phones and, therefore, are unable to get online while several households, like elsewhere in rural Africa, do not have television sets or even electricity to power the gadgets. This thus left them with no options for learning outside the school set up. Dr. Ahmed Kaweesa Sengendo, Rector of the Islamic University In Uganda (IUIU) who is also an expert on instructional technology and pedagogy, observes that radio and television teaching is a special mode of instruction that needs to have both the teachers and learners trained.

Without training the two, argued Dr. Sengendo, this mode of teaching might be misused and made unproductive.

Dr. Sengendo also notes the lack of feedback in this mode of teaching. “Feedback is so important in the teachinglearning process because it helps the teacher to assess whether learners are attentive and following. The kind of TV and radio teaching we have in Uganda is one-way; it is from the teacher to the audience. There is no feedback and feedforward. Where you don’t have feedback and teach forward, the effectiveness is greatly compromised. Feedback and feedforward are critical in effective learning,” Dr. Sengendo said.

As more African countries turn to the radio and TV to facilitate continued learning, Elizabeth Kisakye, a child psychologist, says radio and television teachers and producers need to make the lessons more interesting to the learners so that they can follow through.

“The time in which these lessons are broadcasted matter a lot. Since learners are at home, morning hours are better for the lessons. Long narrations can be boring,” Kisakye said.

Educationist Jonathan Kivumbi feels that many of the interventions were hurriedly developed without guidance. Without prior preparation, Kivumbi argues, African policymakers rushed to introduce an alien model of teaching and learning. “The policymakers are using a copy-and-paste approach. They want to do things as they are being done in the developed world and left institutions to lead the sector into an abyss. Digital learning is not something you just introduce out of the blue,” Kivumbi said.