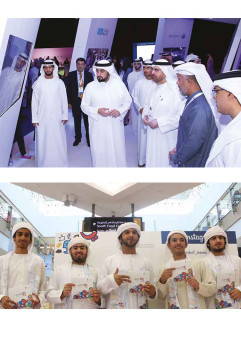 Towards Making Arabic a Software Programming Language; Challenges and Opportunities

“I participated in Bil Arabi competition and I did not win, but I was not sad, because the knowledge I acquired is more important than the award itself,” commented a follower of one of the Bil Arabi initiative’s social media platforms. Bil Arabi initiative stemmed from youthful hearts, full of love for their language, who proposed it to the Mohammed bin Rashid Al Maktoum Knowledge Foundation (MBRF).

This initiative brought about a great positive resonance in the hearts of the Arabs and has increased the interactions in the virtual space, with its literary aesthetics and linguistic benefits that ref lect the wonderful rhetorical and expressive inventory in books of language, literature, grammar and meanings. All of this has motivated us to turn our attention on the social media channels and the virtual space forums, which led to a question: Can the Arabic language become one of the global programming languages, and have a foothold ahead of all the languages dominating the software science?

The virtual communication sites had always posed this question, and frequent calls urging to restore the role of Arabic language and grant it more attention have increased to include demanding a programming language in Arabic. Many followers showed interest and support for the initiative, but quite a number saw the campaign as nothing more than daydreams and exaggerations that have no place in the crowd of languages given the tremendous development that modern programming technology has reached. To some, the demands were hallucinations that can never be realized in the era of technical and technological explosion which is dependent on modern programming languages.

Others on social media were not satisfied with these demands, as they saw them as impractical steps and unsubstantiated calls for restoring the past glory of the Arabic language.

Seeking to improve the position of Arabic language in the digital world should be based on openness and the desire for establishing a new place for this great language.

The Importance of other Languages

It may be said: Bil Arabi initiative has succeeded in returning the Arabic language to our daily life and on social media, but it does not, in any way, call for ignoring other languages. Rather, the translation movement from other languages into Arabic is the way to start from where the others ended, not to start from scratch, at a time when evolution is calculated in seconds, not days, or years.

Yes, a programmer who has mastered the latest advanced global programming languages responds, but can one of these local languages be used in the software industry or even academic uses? The vast majority of non-English-based computer languages are of limited audiences. They were often developed as a hobby or graduate project and were not used after this point. Arabic language is not exempt from this phenomenon. There are several Arabic programming languages, and some of them were developed by huge companies such as Sakhr, but their professional use is close to none.

The reason is not a weakness associated with the Arabic language, or even a weakness of the Arabic programming community. The reason is that, like it or not, the mother tongue of IT is English. Look at successful language and operating system developers and you’ll find people from all over the globe, from different cultures and languages, all of whom have adapted their products in English. The reason is that for any advanced product to succeed, it is directed to the category of developers. The most important point is not the effectiveness of the product, as some might think, but the wider market for which the product is intended. Since the vast majority of the market uses English to communicate, it makes sense to target it.

In this respect, one of the participants in the Bil Arabi initiative shed light on an important aspect that Arabs especially Arab programmers must take into account in their journey towards developing an Arabic software operating system. Arab programmers should not be driven by excitement about the desire to have Arabic get a foothold in the world of programming languages, without looking at the time that the founders of programming science spent to get to where it is now.

Successful programming languages are not out of chance, successful languages were created by their owners for a specific purpose, and before they were made available to users, they went through several stages until they became popular.

There are Arabic programming languages, but what do you want from developing those languages? Do you want to learn how to design a language, for example? It’s great, but if you want a language to use and programmers can’t live without it, you have to develop it for at least ten years in order to meet basic needs and avoid deficiencies. The reality says a different thing, unfortunately.

The programmer adds: I am not against the development of Arabic as a programming language. Development of any programming language is an excellent skill and experience which is very nice to have, but will I constantly develop this language? Mostly not, unless there is support and sufficient advanced features that make me leave the other languages I am working on now.

This programmer’s statements draw us to a very important aspect which is that the success of an Arab programmer in developing Arabic as a programming language is nothing more than the attempts of amateurs or researchers who loved Arabic and tried to find a place for it among programming languages. However, for such a project to be successful and sustainable, it must be heavily financed. We are not talking about a product in a primitive market, but rather a challenge to a competitor in the big programming market. And competing with it is almost impossible, given the billions of dollars allocated to it for its development, so what about the amount needed to establish a new product?

In conclusion, appreciation and respect must be given to everyone who sought to serve the Arabic language in any field of science and any chapter of knowledge, but in return, Arabs should know that the history of science among the Arabs has taught that the goal is to access knowledge and invest it in the service of mankind. There is no doubt that achieving this goal will take place in any of the world’s languages. It is also imperative to follow in the footsteps of the early Arabs who understood the meaning of knowledge and loved the truth.

This may be an impetus for programmers who love Arabic to break into this section and create an Arabic programming language. If it is impossible to compete with the programming language that is currently on the throne of technology, let the translation into Arabic movement be revitalized.