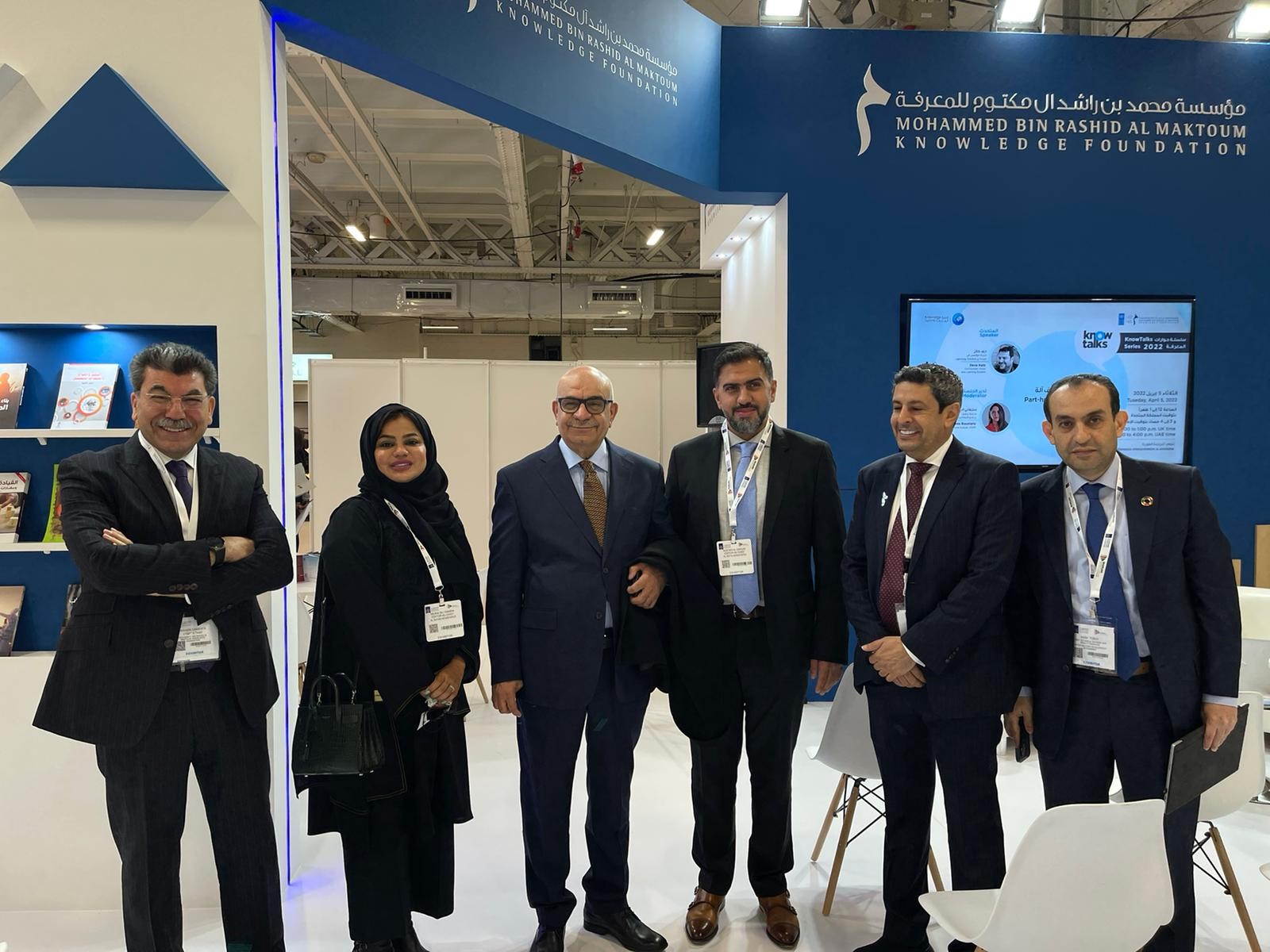 April 07, 2022- As part of its role as a leading institution in the consolidation of knowledge in regional and global societies, the Mohammed Bin Rashid Al Maktoum Knowledge Foundation (MBRF) in collaboration with its knowledge partner - the United Nations Development Program (UNDP) is participating at the London Book Fair - one of the oldest international exhibitions in the world - hosting more than 20,000 publications.  The MBRF is taking part in the event, which is being held between April 5 and April 7, 2022, at Olympia London.

The pavilion of the foundation highlights MBRF’s knowledge programs and projects in collaboration with strategic partners, including various Arabic and English editions of the Global Knowledge Index Report and the Future of Knowledge Foresight Report. It also showcases the Mohammed bin Rashid Al Maktoum Knowledge Award, the Digital Knowledge Hub, the Nobel Museums, and previous sessions of the Knowledge Summit.

H.E. Jamal Bin Huwaireb, CEO of MBRF, said: “The Foundation seeks to consolidate its global leadership and continue its tireless endeavour to cooperate with entities and organisations around the world by supporting and participating in major knowledge initiatives and events. It maintains its active role, globally, in the knowledge field, in line with its vision to promote the dissemination of knowledge in societies to foresee the future and embrace innovation and knowledge entrepreneurship, thereby contributing to the sustainable development of mankind.”

“The MBRF’s agenda during the London Book Fair includes the launch of the ‘Knowtalks’ series, which will continue throughout this year in collaboration with UNDP. The ‘Knowtalks’ are the result of the Foundation's tireless effort during the COVID-19 pandemic to continue working towards exploring opportunities and challenges to build knowledge societies,” he added.

The ‘Knowtalks’ series 2022 which was launched at the MBRF pavilion, aims at exploring important current knowledge issues. The series saw the participation of a group of prominent speakers and global analysts, who will present a range of innovative and different ideas on topics with global impacts, in collaboration with UNDP.

The first day of the ‘Knowtalks’ series 2022 included two panel discussions. One of them entitled ‘Part-Human, Part Machine’, saw the participation of Dave Katz, Co-founder at Intuizi and Learning Doctors.

Talking about the insights of the researchers and specialists giving more than 22 years to the future, Katz said: “In 2000 there were expectations that people would become part-human and part-machine during the next 20 years. We were all shocked at the thought of it. Everyone expected that we would have silicon chips in our brains after 20 years. This changes the human definition, but so far it has not happened though serious attempts are being made by scientists.”

He explained that what distinguishes humans from other living creatures is conscious and creative thinking, thanks to cerebral activities. “It is good to think differently about the nature of humanity in the future, a natural consequence of human evolution,” he said, adding that the world is keeping pace with an accelerated update aimed at integrating technology in many fields, and then in the near future, humans will not be far from becoming part-machines.

Katz asserted that scientists so far have not be able to make a qualitative shift in inserting chips in the human body. But he expects that there would be a breakthrough in the next 20 years, especially given the efforts of developers and scientists in brain techniques. He then reviewed the gradual development of mobile phones over the past years becoming a major player in human life.

Katz conducted a presentation on the difference between silicon brains and ‘organic’ natural brains, noting that the integration of these two types in the future would advance the ability of the human civilisation to rid the world of challenges, owing to the silicon brains' extensive ability to collect data and information, process large data, and extrapolate results, which would be combined with the creativity and intuition of organic brains.

He further underlined how the human race is set to witness a significant transformation over the next 40 years. He said: “A new reality will be shaped, where people will consider ethics and collective interest owing to the great awareness they have, which will help create a good future that is in everyone's interest.”

The second session, entitled ‘ICT for Knowledge-based Economies’ was presented by the CEO of Tech4i, Paul Foley, who discussed the importance of Governments facilitating the access and use of the internet amongst families in societies, given the positive implications it has on economies.

Foley reviewed the European Commission's studies on the indicators of household internet use and increasing their level of coverage. He mentioned how they allocated around 30 billion euros to help families access the internet and emphasised the importance of Information and Communications Technology (ICT) in communication and its valuable contribution to removing geographical barriers.

Foley also spoke about the how ICT has been evolving since the beginning of the third millennium. He said: “Things have changed to a very large extent, and there is now what is known as the digital economy, which is essentially based on ICT. Besides social networking, digital banking, health services, and buying and selling, it also allows us to experience journalism and newspapers. Therefore, no one should be excluded, and everyone should be guaranteed access to the internet.”

Foley noted how ICT has provided great opportunities for companies regardless of size, by helping them develop innovative products and services, and access many different geographical markets. He said: “The world has been lucky to have the internet for the past two years as it has played a major role in controlling the COVID-19 pandemic. Given the 25 to 30 per cent increase in internet usage per week, actions must be taken towards creating more initiatives, legislation, and policies to increase internet access. Global commitment to ensure everyone’s access to internet services is the need of the hour.”

Foley further stated how ICTs provided a lot of important information about the nature of a users' behaviour, which works to the benefit of businesses and telecommunication companies, creating positive implications for the digital economy. Investment in the sector would be sustainable and yield good results, especially because the sector serves as the backbone of all sectors, allowing governments and policymakers to make appropriate decisions.

He said: "Knowledge is essential to accomplish many projects and tasks, but there are some industries and projects that depend on productivity rather than knowledge, turning knowledge into a relative process. Countries must develop indicators and measure the available data and information together with clear strategies, to rebalance and recognise the importance of the sector to the Government and the need to utilise it well, given that the sector is based on profits and welfare.”

Lastly, Paul emphasised on the importance of gender equality in the ICT sector, noting that the sector was confined to men, but over time, women have been taking up key roles. He believed that there was an urgent need for equality and opportunities for women.