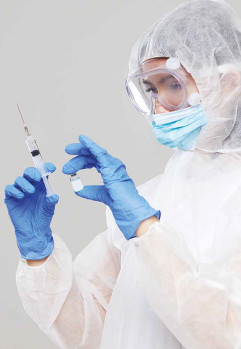 The December 2019 outbreak of the novel coronavirus disease (COVID-19) in Wuhan, China, has led to extensive research on diagnostics, vaccines and drugs for the pandemic that has ravaged world economies.

As of March 20, as many as 42 vaccines were in the pre-clinical stage and two vaccines at phase I clinical trial, according to t he W orld H ealth O rganization (WHO). But what does it take to develop these new vaccines?

In an interview published on September 18, 2012, by Vaccines Today, Prof. Adam Finn, a David Baum Professor of Paediatrics at the University of Bristol in the UK, also head of the Bristol Children’s Vaccine Centre (BCVC) research group, gave a deeper insight into how researchers study viruses and bacteria which cause infection before developing a potential vaccine.

Prof. Finn further explained that vaccines are created in various ways; the first one being, making a vaccine that is in itself an infection but with a version of the original microbe that doesn’t make a person sick. This, he explained, helps in stimulating the immune system by causing a mild infection such that once the body gets exposed to that bug, the immune system responds quickly.

«Another way is to generate material from the bug which doesn’t actually cause infection but stimulates a response. That is referred to as a non-live vaccine. Earlier versions of vaccines were killed bugs. More recent vaccines use more sophisticated ways of creating antigens (antidote)» Prof. Finn said.

Following pre-clinical research, the vaccine is tested in a very small group of people – sometimes as few as half a dozen – in what is called a ‘phase I’ clinical study. This helps to rule out major safety problems and also helps doctors to work out the right dose for the next step in the testing process.

«Before anything can be given to humans, careful steps must be taken to ensure that all material is manufactured in an entirely safe and strictly controlled way so you know exactly what it is that you’re giving to people. In particular, efforts are made to ensure that there’s absolutely no chance of contamination with other infectious or toxic material» he added.

At the phase I trial, about 100 to 200 people are involved but at the next stage; phase II trial, the vaccine is introduced to a larger number of people because researchers want to establish whether the vaccine gives a consistent immune response and also watch out for any side effects.

«Phase II involves giving an established dose of the vaccine, often alongside other routine vaccines, to a larger number of people, often children if they are the target population, the aim being to see how reproducible and consistent the immune response is. At this stage, you can establish rates of common adverse events like local swelling and fever as well as some of the slightly less common ones,» he said.

Where a disease is reasonably common, phase III trials can be conducted to test how the vaccine protects against natural infection. These studies often include tens of thousands of healthy volunteers so that doctors have a better chance of discovering rare problems that did not show up in the smaller phase II studies and prove that the vaccine prevents the disease.

Prof. Finn said vaccine trials differ from studies of new medicines in a number of crucial ways. For one thing, a much larger number of people is included in phase III trials for vaccines because researchers want to detect any very rare side effects caused by the vaccine.

Another thing that makes the tolerance for side effects in vaccine trials lower than for medicine trials is the fact that the volunteers – and the future target group for the vaccine – are healthy to begin with.

«For most vaccines, except where the disease to be prevented is very rare, trials are required to show prevention of disease. In all cases, studies looking for rare unexpected side effects have to be done. At this point, much larger numbers of people need to be immunized. The primary aim is to demonstrate that the people receiving the vaccine are protected against disease» he said, adding, «For this to be possible, the disease must be common enough in the population for differences between the vaccinated and unvaccinated people to be detectable within a reasonable time frame. There are often tens of thousands of people included in such phase III trials which also pick up rare side effects and adverse events that might not be noticed in small trials.»

To develop a vaccine, there
first has to be research done
to understand the nature of
the infection you’re trying
to prevent.

For most vaccines, except
where the disease to be
prevented is very rare,
trials are required to show
prevention of disease.

«To see a treatment effect, you don’t need to study so many people unless you are looking for a small difference between two similar treatments. When you test a vaccine in a healthy population, you need a larger group of patients especially if the infection you are trying to prevent is rare and to rule out rare side effects» Finn said.

After going through the different stages of trials, the vaccine’s manufacturer submits a report to a regulator body like the Food and Drug Administration (FDA) for the case of the United States of America (USA), for approval. After approval, the vaccine can be made available to the public.

«If that’s obtained, national experts decide whether to recommend the vaccine for all children, high-risk groups or just to make it available without adding it to the routine immunization schedule» Finn said. At this point, ongoing monitoring of the vaccine’s effect takes place as part of what can be called phase IV trials and doctors are encouraged to report any unexpected apparent side effects.

«Once that has been done, phase IV surveillance studies may be done to look for trends in the disease – hopefully, downward trends. Ideally, a large proportion of the population – usually young children – is offered and receives the vaccine. In many cases, vaccines prevent illness not only among those who have received them but also reduce transmission to others who have not been vaccinated as well. If you carefully count the number of cases coming through your health system, you can track the disease as it becomes rare or even disappears completely in some cases» he elaborated.